New IT architecture: Three years ago, the insurance company HUK-Coburg entered the market with the car trading platform HUK-Autowelt. Three years later, the fast-growing startup relies on the OneDealer web- and cloud-based automotive IT solution. Let’s see why. 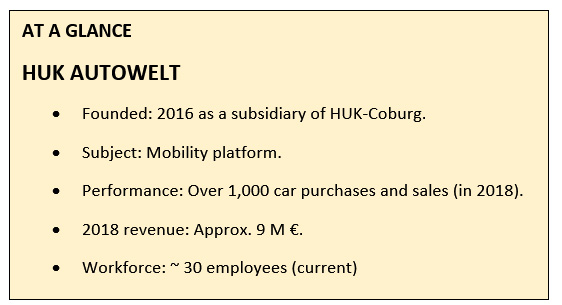 Eleven weeks can be pretty short! Especially for an IT project of this scale.

Julian Cornelißen, CFO of HUK Coburg Autowelt GmbH, can tell you a thing or two about it. “The biggest challenge was the timeframe”, he confirms, in an interview with AUTOHAUS.  After a few introductory sentences, he is drawn to the project again, enthusiastically talking about CRM requirements, replacing the existing DMS and the advantages of a new, fully integrated system. He occasionally uses technical terms such as hypercare-phase, post-implementation roadmap and first-level support. In the discussion, you quickly feel how professionally the whole thing has been planned – and how challenging the implementation would have been even without this excellent timing. I’m very proud that we accomplished all that in such a short timeframe,” says Cornelißen, “it was a great achievement by the entire team”.

But first things first. Around three years ago, Germany’s largest motor insurer, HUK-Coburg, launched Autowelt GmbH. The goal: to launch a new car trading platform. The company, which was founded in 2016, is developing forward-looking mobility offerings for every aspect of private vehicles, according to a statement from Franconia. Anyone who visits their website today will find sentences such as “Out with the old, in with the New” and “Buying a car without worries, that’s our promise”. Specifically, the subsidiary of the insurance giant has stated that it buys and sells used cars at low fixed prices, a 200-point check from Dekra and a twelve-month full warranty. In addition, there are nationwide service stations for the evaluation and purchase of used cars, as well as a central call-center.

A new IT concept

With CEO Sebastian Lins and CFO Cornelißen, the insurance industry last year appointed two former BCA managers to the management board of HUK Autowelt in Düsseldorf who possess a great deal of experience in the commercial used vehicle trade. They realized that they would have to make some adjustments to their startup concept in order to be able to successfully establish nationwide buying and selling. “Not a new basic approach, but a new design”, explains Cornelißen. “…Like a piece of clothing, we’ve changed the dimensions a little. And the IT architecture has been adapted.

Which brings us to the solution provider, OneDealer, and their partner, MHP. Cornelißen views them as much more than simply an IT provider, with the strengths of their teams, combined with the system’s workflow-based approach, as having a catalytic effect in the overall success.

“The entire project, including the training of all employees, was implemented within just eleven weeks,” says OneDealer CEO Robert Battenstein. At the time, his company had responded to the Düsseldorf tender, which described the processes and future requirements, but also defined the quantity structures for the next three years, the various implementation phases and the objectives. Cornelißen emphasizes two decisive advantages for OneDealer: first, the fact that it’s powered by SAP and, second, it offers a fully integrated approach. Immediately after the contract was awarded, a workshop was held in October 2018. Above all, the goal was to set up a usable system within a manageable timeframe. The next steps followed, always keeping an eye on the roadmap and the “going live” date. According to Battenstein, the existing DMS was replaced, the 43 Carglass stations and the central call center were successfully integrated and the business process expanded. The business now tightly controls its sales and lead management processes in both buying and selling via OneDealer’s Digital Sales Workplace system in coordination with the Carglass stations, the insurance agencies and the call center.

“The processing, scheduling and accounting takes place in our DMS, based on SAP Business One,” says Battenstein. And he adds: “All OneDealer modules are web-based and thus independent of on-premise infrastructure, so they can be operated on Android, iOS and in every browser. “In addition, everything lies in the Cloud, in a German data center. Thus no expensive investments in servers and networking are necessary in the car dealership”.

The complexity of the project can be seen in how new leads are managed. Sometimes, sales leads are generated in the HUK customer service office as part of the tariff discussion on the occasion of a vehicle change. At other times, the company website or even a simple phone call can be the touchpoint. Battenstein says: “All leads are centrally managed by the call center within the OneDealer Digital Sales Workplace module, assigned to the next purchasing station and tracked”.

The next steps include arranging and booking appointments, drawing up the sales contract via the OneDealer tool and marketing the purchased cars.

The HUK-Autowelt CFO describes the cooperation with OneDealer as “a very productive cooperation”, he sees the company as a “professional sparring partner”. And Cornelißen really means this, since the second and thirds phases of the project are pending. Among other deliverables, a central Campaigns Management system is being set up. After all, the buzzword of the day is “Omnichannel commerce”.

These cookies are used to serve personalised content based on the users’ interests. The information gathered can also be used for targeting purposes of promotion advertising campaigns, and/or promotions.